GOGG HOLIDAY TO DERBYSHIRE AND THE PEAK DISTRICT 2018

‘There is not a finer county in England than Derbyshire’ writes Jane Austen in ‘Pride and Prejudice’ and, although there may be counties of equal merit, Derbyshire certainly is one of our most beautiful. Within the county lies most of the Peak District which can claim to be our premier National Park as it was the first to be designated in the UK and contains many of our most cherished landscapes from the beautiful limestone dales such as Dovedale and Monsall Dale in the south to the high gritstone moorlands of Kinder Scout and Bleaklow to the north. Also, from GOGG’s point of view, the county contains some of our finest houses and gardens including The Duke of Devonshire’s Chatsworth House and estate which is believed to have been Austen’s model for ‘Pemberley’.

Our holiday is being arranged on our behalf by Barnes Coaches of Swindon and we will be visiting gardens in the Peak District and surrounding areas. It will run for 5 days and 4 nights from Monday 25th  June and will be based at the Metropolitan Hotel in Sheffield. Although in South Yorkshire, Sheffield is located right on the doorstep of the National Park and is ideally located for visiting gardens both in the Park and in Derbyshire more generally. The city has been described as the ‘greenest city’ in the EU and contains 2 of the gardens we shall be visiting during our stay. The cost of the holiday excluding the entry to the gardens will be £329 plus a single supplement for the first 14 single rooms of £40.The final total is likely to be less than £400.

The programme has to be finalised with Barnes Coaches and the gardens themselves but the proposed itinerary is as follows:-

Day 1 Calke Abbey  This was formerly the home of the Harpur-Crewe family but is now owned by the National Trust who have brought the gardens back from near decay. The walled gardens is being used for growing flowers, vegetables and also includes a kitchen garden. Also of interest is the last surviving early 19th century auricula theatre in England and an orchard containing many old local apple varieties.

Sheffield Botanical Garden was opened in 1836 and provides 19 acres of green ‘lung’ for the city. It has recently been redeveloped and includes 3 impressive glass pavilions,  a garden showing the evolution of plants and a rosarium giving  the history of the rose.

Day 2 Chatsworth The home of the Dukes of Devonshire for over 400 years the105 acres of garden are amongst the greatest in the UK. ‘Capability’ Brown destroyed the original formal gardens to create a woodland park giving lovely views to the surrounding moorland. Later Paxton was involved and although his great conservatory was destroyed his giant rockery has been rebuilt and the 84 metre high Emperor Fountain still gives great pleasure. As well as the formal areas the garden also contains areas of wild flowers. 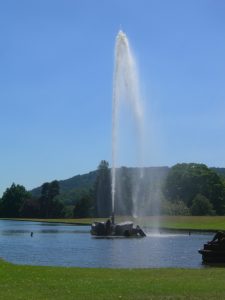 Haddon Hall Home of the Manners family for over 800 years this castellated manor house is situated by the beautiful River Wye in the heart of the Peak District. Best known for the collection of roses, the garden also contains many other features including unusual perennials in a bed against old limestone walls.

Day 3 Hillsborough Walled Garden (Sheffield)  This consists of 2 acres of peaceful greenspace within the city with a wildlife area, herbaceous borders and a formal garden with raised beds. It is owned by the city council and managed in partnership with the local community.

Lyme Park Although situated in Cheshire, the house and surrounding parklandwhich are in the hands of the National Trust lie on the western edge of the Peak District.The Palladian mansion acted as ‘Pemberley’ in the landmark BBC series of ‘Pride and Prejudice’ and the iconic (but non-Austen) scene where Mr Darcy dives into the lake was filmed here. The gardens of 17 acres are thought to be one of the Trust’s finest and are of great historic importance with many features from Tudor and Jacobean times. Amongst other things there are magnificent Victorian-style formal beds, Jekyll-style herbaceous borders and an Edwardian rose garden.

Day 4 Thornbridge House  Situated near the pretty Peak District village of Ashford-in-the-Water, the Hall has become well known as the home of a new brewery and although the main production has been moved to Bakewell, this is still used for experimental brews. Designed in the 1890s to create a vision of ‘1000 shades of green’ from the owner’s bedroom, the gardens have been further developed in the last few years to include a 100 foot herbaceous border, kitchen garden and scented terrace including a stunning orangery amongst other things. 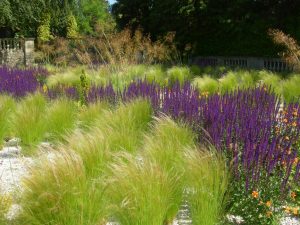 Hardwick Hall The Elizabethan mansion was built by Bess of Hardwick on an exposed escarpment site and walls and high hedges protect the gardens from adverse weather conditions. The gardens include herbaceous borders, an outstanding herb garden and an orchard with many varieties ofapple, pear and plums with the grass left long for daffodils and wild flowers.

Day 5 Renishaw Hall The original garden was created in the Italian style by Sir George Sitwell who had spent much of his life in Italy. Within sheltered walls and a  framework of vistas, plants ‘riot in ordered confusion’! The present owners have added a water jet and a number of different gardens divided and protected by yew hedges. They have also enlarged the borders and linked the gardens to the woodland walk and nature trail leading to the classical temple.

Meynell Langley Trial Gardens (Ashbourne) A formal Victorian garden of ¾ acres has been established over 20 years to display and trial many new and excisting varieties of bedding plants, herbaceous perennials and vegetable plants grown at the adjacent nursery, There are over 150 hanging baskets and floral displays and 45 varieties of apple, pear and other fruits displayed.

I shall be sending out the poster and booking forms when these are available, to all those who usually join us on the holidays but anyone else who is interested should ring me on 01242 230442 or email me at glosorgg@gmail.com for details.  The holidays are very friendly affairs and any newcomers are made very welcome, the days are packed with garden visits and the evenings may be spent either relaxing at the hotel or looking around the local area. There are many real ale pubs in Sheffield.